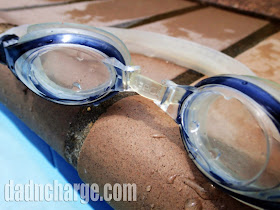 Sometimes as a SAHD, we face the ugly past. With change in perceptions of gender roles comes this conflict between the ways of old and the progressive modern dad. Unfortunately, we aren't just seen as a dad but something much more nefarious. It may happen at a park or at a class in which a stay at home dad might be the only man there. We often don't receive caveats for being there. A man, in a public area where there are children, must be a threat.

Many of my fellow stay at home dads have experienced this clash of culture and often it has happened in front of their own children. A SAHD in my circles had such an encounter with a mom and her short sided opinions of a dad trying to enjoy a day with this children. I felt it was necessary to tell his story and he offered to share it with me. If you want to leave a comment for him, call him Swim Dad. Here is his guest post:

I am veteran SaHD, with nine-year-old twin boys.  Recently, I took the boys to the Swim Club where we are members, it's not fancy or exclusive, but it is a club not a community pool.  We got there about 1:30 and it was pretty crowded, I found two free lounges amongst the towel strewn ones.  The boys jumped in and I settled down.

The whistle blows for “adult swim” the boys jump out, grab a baggie of pretzels and begin enduring the long wait.  About a dozen young girls, aged ten to twelve, tweens I guess, came my way and I realized I had the middle chairs of their twelve chair claim.  The boys were, uh, watching the girls so I asked them if they’d mind moving, they thought not, realizing that that would mean engaging the girls.

To make a short story longer I asked the girls who said oh no, no, no.  Number Two said “Oh, we don't really mind, it'd be the right thing to do... you know.”

This seemed to convince the kindly ringleader of the girls and they moved from the last two chairs and we moved off the ones in the middle, there was bumbling and giggling, the boys were being silly and the girls were being flirty.  It was cute.  We settle in and adult swim ends and we move on.

Except... except a storm was brewing across the water and it was not in the sky.  I group of five, sometimes six, women were talking animatedly and trying conspicuously to not look my way.  I figured they were the mothers of the girls and I left it at that, but, I did sense something.

Adult swim again.  The boys come back grab some PB crackers and sit again, talking and watching the pool and , uhm, other things.  The girls all go over to a picnic table, grab snacks and return to the lounge-chairs.  The girls closest to my boys begin talking with the girls about snacks.  One of their smooth opening lines is: “I don't really like those Blue Ranch Doritos... they're kinda dry.”  They talked with the girls about cookies and Gatorade and chips and glazed donuts.  I prompted Number One a couple times trying to keep him in the conversation.  The girls had Fig Newtons which the boys hate and I said I liked and one of the girls went to get me one and the another girl said I've got one and, soon, I was munching a Newton.

I know this is getting long but, I wanted to paint the scene as pleasantly and memorably, as sweetly, as possible.  Summer pool. Boys, girls. Cotton clouds.  Blue sky.  Laughter, conversation and...

“Excuse me!?  We don't really think it's a good idea for you to be talking to these girls!”

I look up at the blue suited MommaBear beside the chairs, one of the mothers I'd seen earlier.  I take off my sunglasses and and say, “I'm sorry, what'd you say?”

“We don't think you should be talking to these young girls.”

“Why, Daddy?” comes from behind me.

“Mom, what on earth is your stupid problem,”  The Fig Newton girl asks.

“Well, why on earth would a grown man sit in the middle of a bunch of young girls anyway,” the woman answers.

Tone.  It is all about tone and undercurrents and I know what this woman thinks of me instantly, her and that group of women – and it is not nice, in fact, it is ugly.

“There wasn't anyone here when we put the towels down and... why does it matter, Dad?”  The other son this time.

My boys are confused, the girls are mortified and I am thinking hard.  I know the woman, I've seen her here holding court and ignoring her kids and I've seen her somewhere else but I can't remember where.  I have to make a decision, a hard decision.

“Let's get going, boys,” I say, smiling at the younger girls.  “Thanks for the Fig Newton.”

“Let’s go home and watch the first game of that double-header, boys.  We should probably just go.”

I smile at the unkind woman as she smirks behind her mirrored aviators, positively quivering with vengeance and mangled justice.

I've packed up quickly and stand up.  “Say goodbye to these lovely ladies, guys.  Let's shove off.”

I don't get too far when I hear the sweet Fig Newton girl.

“Jeez, mom, what is your stupid problem?  He's a nice guy and those boys are so cute.  Mom, they go to our church.”

That's where I'd seen her.

We walked out past the pod of mothers, laughing about how much they hate figs and how hard it must be to play a double-header.  It was the right conversation to have today, today...

You can argue all you want about this.  Should I have stood my ground?  Maybe.  Should I have taken on the bully of a mother and whittled her down to the cold fish she truly was?  Too easy, really, too cruel.  Should I have gathered the two or three other moms I knew there that day who had treated me with dignity and kindness when I was new here, and knew my wife, and presented them as character witnesses at this trial by innuendo?  Procedurally, I wasn't sure how I'd go about that.

Some may think what I did was a chickenshit way out.  Well, you know what, this isn't the summer for explaining predators and irrational fears and prejudice and adult bullying and simplemindedness and the treatment of dads in society and envy and, well, dirtiness.  No, this is the summer for hitting baseballs, jumping off boards and eating watermelon while the hot Ohio sun fades behind the distant trees.