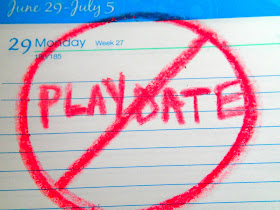 When I was a kid and I wanted to play with my friends, I would call them up on the rotary phone. If I was lucky enough to get the push button phone, if my older brothers weren't on it, I would call them in succession running down a list of my go-to guys.

"Brian, this is Chris, can you play?" He'd check with his mom or dad and come back on the phone or I'd hear the entire thing as if I was there "MOOOOOMMMM! CAN CHRIS COME OVER?" After confirmation, I'd jump on my bike and head to his house and I knew that I had to be home before dinner.

That was it. There was no pre-scheduling get togethers at each other's homes. Playdates didn't exist.

This playdate garbage is ruining our kids. I shudder every time someone asks me if our kids can have a playdate together. That word is almost as bad as Mr. Mom. Almost.

This idea that two kids playing together has to be an event is altering the spontaneity of our children. It has become too formal with set dates and times and has rendered my son incapable of calling his friends because he feels awkward asking, especially when a grown up answers.

Adding the word date to this phenomena of play has ruined the whole experience for me. It makes me feel like I should be preparing a cheese plate and some activity that as a "host" our guest kid will be taking home a fabulous parting gift.

Can't I just play on my phone while they play in their room instead of planning some elaborate craft where they end up making a stained glass window just for fun?

It's time that parents stop overdoing things when it comes to our kids. The emails and the special venues are starting to wear me down. My special venue is my backyard, where I may or may not be pulling weeds while your kid plays on our swing set with my kids. Hell, I may even turn on the sprinkler for them if they want to get crazy.

Also, the whole production between you and me is unnecessary. The back and forth emails about your plans and my plans are exhausting. Let me get out my calendar and let's discuss. Can she come over? No? Okay then, let's move on.

The word playdate also gives off this connotation that I should be opening doors for you as you drop off your kid. They are only playing and there is no need for us to hang out unless you are one of those moms that feel uncomfortable leaving your kid with me. You probably don't want to be THAT mom though because when I drop my kids off at your house I'm not loitering because I trust you.

I am OK with you dropping her off and dashing to the grocery store sans child, just as long as I also get to dump my kid off on you another time when a Marvel superhero matinee is about to drop.

Kids are slowly being desensitized to the spontaneity of play. Before cell phones and social media, we found out where our friends were by the multitude of bikes parked on the front lawn. I spent most of my time as a kid riding my bike to the park and playing pickup games of basketball and baseball. We played Star Wars for hours and acted out scenarios from our heads. We climbed trees!

When there was no one to play with, I didn't pester my mom to contact all her friends to set something up. Sometimes she would just point and other times she just told me to go outside and I threw a ball against the garage, for hours.

I made up championship basketball scenarios, threw pop flys to myself, and made up games with whatever I could find in the garage. One game involved a skateboard, a tennis ball, and a storm sewer grate. Skateball never took off probably due to the fact that the rules fluctuated on a day to day basis because we could never remember them each time we played.

My father, who grew up in NYC, played stickball with a pinky ball and a bat that he sawed the handle off my grandmother's new broom. From one ball, they invented a dozen games like "stoop ball" which clearly was created from just being outside and working with the environment and what they had. Play wasn't about what you could do, but what you could make of it.

Many of our kids are totally incapable of this activity and they are losing their ability to think outside the box because play is handed to them on a silver platter. My six year old daughter tells me often that she is bored if she is not being constantly entertained and all too often instead of forcing her to figure it out, I defer to the iPad.

Kids are at their best when their imaginations are in play. We are dumbing down their ability to be independent thinkers with scheduled activity and feeling like we are to blame when they have "nothing to do" Isn't it ridiculous that I feel like I am a cruise director in charge of keeping everyone occupied?

When will kids learn to use their imaginations again and not rely on an app to keep them entertained? It's our responsibility as parents to make it stop. Let's start by banishing the word playdate and focus on just making our kids play in imaginative ways. Let's lose the structure and the formality and remove the dates so they can just focus on playing.